Super supporter! Donated $$$ to keep SocialCu.be up and running for years!

I enjoy long walks on the beach.

RSUs are... not doing great lol
Go to status

I've had so many issues upgrading my PC and spent so much time waiting on new parts. I ended up redoing my whole water loop and I did some air leak testing to make sure everything was tight. It couldn't maintain pressure and I could figure out which single source was causing the leak: turns out it was a loose fitting, a broken reservoir, and slightly leakage in the leak tester itself. Total pain in the butt to diagnose and I'm not even 100% sure it's sealed so I have to do an overnight water test on top of the air test. I'm going back to air with my next PC aaaa
Go to status

I have a crapy $30 pump in my watercooling loop which works fine for my low volume PC but the wires are so brittle and snap off with the slightest pressure. I just broke my second pump and I've been looking at more sturdy DDC pump-reservoirs but the setup I want is $180 so I think I can just keep replacing that cheap pump several more times lol
Go to status

I'm upgrading to a slightly bulkier motherboard but got lazy and wanted to keep the same tube cuts to the motherboard. It's the same length tubing but over a longer distance. I got it all to fit, was happy, started refilling with coolant, then noticed it was taking a really long time. Then I noticed a giant puddle of coolant at my feet. The added tension badly cracked my CPU block and coolant spilled all over the motherboard and IO (nothing plugged in though) and now I have to rebuy/redo half my loop
Go to status

Ugh one of my company's smaller orgs got an approval for upgrading all mobile devs to M1 Maxes regardless of laptop upgrade cycle status. My org just approved the M1 Maxes but only as an upgrade, so I can't get one for another 1.5 years when my current laptop expires and I have to keep living with the 30 minute build times and one IDE at a time.
Go to status

Gotta love when I don't know something so I Google it and all the results are old Reddit questions where the only answer is "seriously, you couldn't Google this?"
Go to status

I started playing New World a few days ago. Enjoying.
Go to status

One of my classes was a cross-listed course with both undergrads and grad students. I registered as an undergrad but the entire time everything felt directed towards grad students. I still put the undergrad course numbering in every single one of my assignments. I also recently emailed the professor asking about the final project, specifically noting being an undergrad. He told me I need to turn the final project in on time to pass the class. I slaved overnight on my final project and got this feedback: 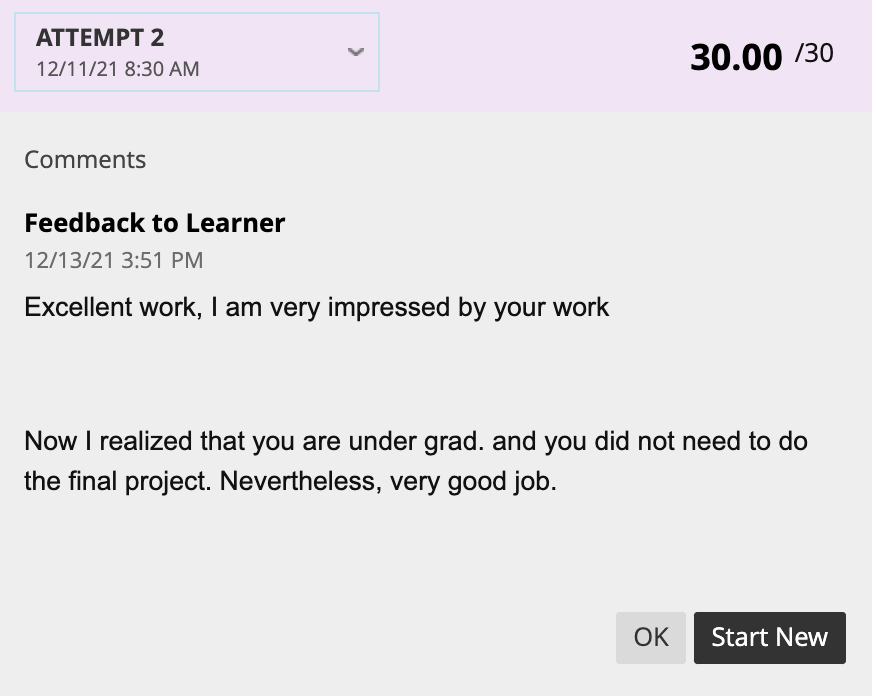 Pissed that I kind of did the project for nothing. It was completely irrelevant to the course too. The whole course was writing Java console programs, but then the final project had us do a 3D visualization for the web (which I ended up doing in React and Three.js, completely unrelated to everything this semester). The homework assignment instructions were also only a couple sentences long and in broken, contradictory English that didn't actually cover the requirements of the assignment. Not very happy with the class and I'm a bit upset I spent more than I needed to on it instead of work or my other class.

I got a super strong random urge to build a foot drump stomp box and do a one man band. I think the only thing holding me back is living in an apartment with downstairs neighbors.
Go to status

Sometimes I wonder if I would've supported the revolution if I lived in the 1700s. Knowing what I know now I'd like to say I would've, but less than half of colonists actually supported the patriots and I don't think I would've been one without the context of American history.
Go to status
v3.2