Won a monthly contest against all the other users


Site admin and SocialCu.be developer. Created DSiKlub/3DSKlub (no longer online). I program games professionally and make a bunch of stuff in my free time.

Need a cheap domain name? (Yeah you do)
Check out DomComp.

Dang I just got Phase Plant and Snap Heap and now I have like 100 plugins to install lol.
Go to status

What even is free time, anyways? 🙃
Go to status

Seem like it's time to level up my hard surface modeling skills again.
Go to status

Ok this might be my last batch of optimizations for now.

Noticed that avatars weren't being cached right, apparently the rewrite rule that removes the .php extension breaks caching since it sends a redirect. Additionally, we would send a redirect for the default avatar ourselves, so now we just return the contents directly which annoyingly bloats the cache if you load a whole bunch of avatars that haven't been set, but they're small enough that it doesn't really matter since the time saved by not sending additional requests more than justifies it.

Another observation is that I believe the host has imposed a rate limit of 2 requests/sec since everything seems to trickle in at a very steady rate consistently. Unsurprising given how little the site costs to host, but means that anything that can be loaded from cache can save up to 500ms of loading time which is kinda huge for pages like the friends list (assuming you're popular :P).

With the previous optimizations in place, the first site visit should be faster and with these optimization in place, subsequent visits should be faster, so wins all around. The only real areas left for any significant improvement are
1) our libraries on external CDNs (jQuery, Pusher, Bootstrap, Google Ads)
2) the actual server processing time (including unnecessary stuff, performing unnecessary/slow queries, simply needing better hardware)

1 is potentially something that could be resolved by us making custom stripped-down versions on the libraries and/or removing dependencies, but neither are trivial so I'm not gonna do that (at least not right now). 2 on the other hand, is just an absolute nightmare to track down and profile in any meaningful way and given that 90% of the time the low-end hardware is unnoticeable, I'm not really tempted to pay extra to shave an extra ~0.5s of processing time lol.

So yeah, that's where things stand.

Pushed a few more site optimizations. Probably won't make a huge difference unless you're accessing the site for the first time or over 3G or something, but the main stylesheet is now minified (again), I set some other resources to preload as needed, and reduced some blocking requests with the navbar cube (it's now just a svg instead of a webfont which was stupid for one icon).
Go to status

Oh also, next time you change your avatar it will be saved as webp like I mentioned, so the more people do that, the smaller the avatars will be
Go to status

Ayy, fixed it. Dang inconsistent behavior, worked fine in my dev environment, but failed on the server.

Though I realized if you message yourself you get notified and have no way to clear it lol.

Man, we should be saving QNs as webp too! -_-
Go to status

Dang, we should be saving avatars as lossless webp instead of png. It's basically a free ~25% reduction in size and has 95% browser compatibility now.

This is really cool. Hyped for when browsers fully adopt it.
https://www.youtube.com/watch?v=JCJUPJ_zDQ4
Go to status 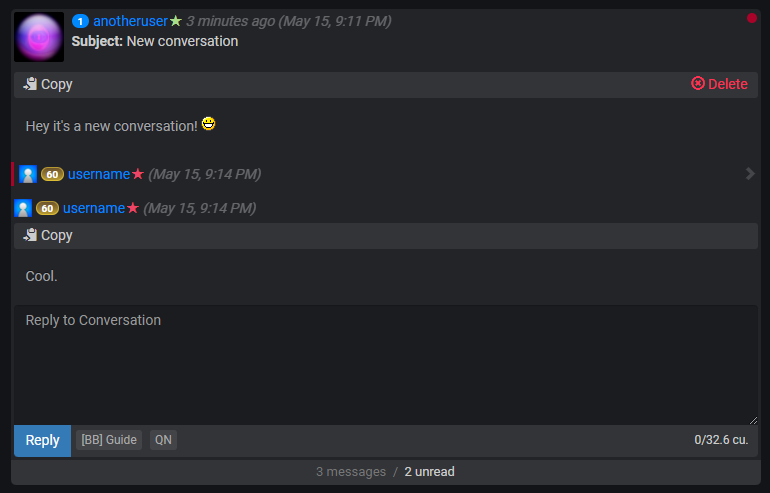 I just realized that the box-shadow when focusing this textbox gets clipped on the sides.

How did I not notice that for so long?
Go to status

Dang it man, there's a lot of edge cases to handle for this mail rework. Gotta make sure the notifications go to the recipient of the most recent message, not the conversation starter, gotta update the read status async as you expand the messages, gotta handle one message being deleted so the whole conversation isn't lost, etc.

I thought this would be a bit faster lol.
Go to status
v3.2